Okay yall this is our last update for the evening. 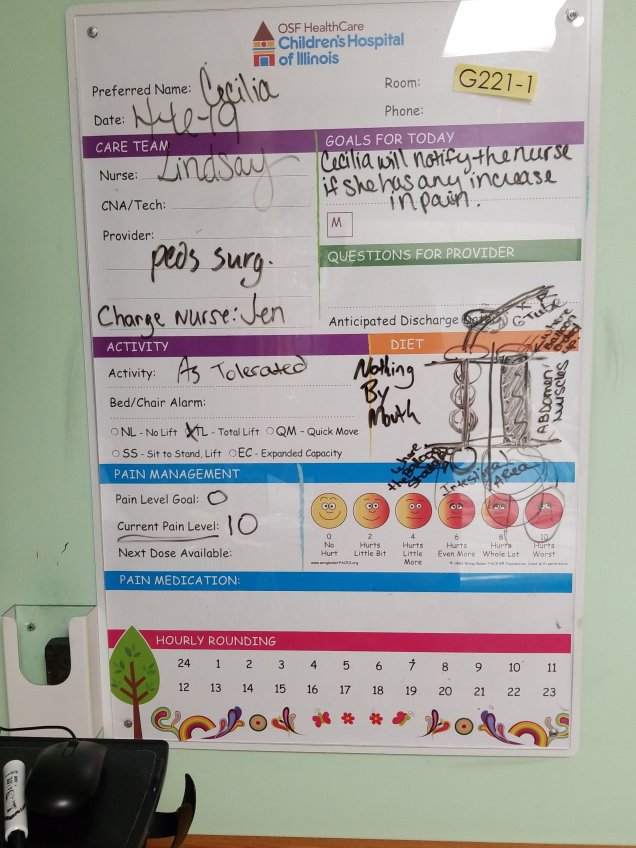 The pain has been too much for her to tolerate so her procedure originally scheduled for monday, then rescheduled to tomorrow, ended up happening this evening- bedside.

The pediatric surgeon’s resident, removed the tube that was holding her track open and placed a much bigger size tubing.

The balloon ripped up her abdomen wall so much that they had to go from her normal size tubing 14 to an 18 inch.

It did not go in smoothly 😞 my poor girl.

They gave her a high dose of Fentanyl and an oral dose of Narco to help ease the pain. But when he went to insert the bigger tubing into the overly irritated and ripped up abdomen wall, it knocked the wind out of ceci so badly I had to grab her tightly and tell her to breath.

Even with the pain medicine it was too much for her to bare.

And we still do not know if she’s out of the clear with this darn wound.

We are working on getting her into a fresh gown now, getting her comfortable for the night and we’ll revisit everything with pediatric surgery tomorrow.

We are hoping for an uneventful night and loads of 😴 sleep for both of us.

This has been a very trying week for ceci and our family.

Alexis, ceci and our family 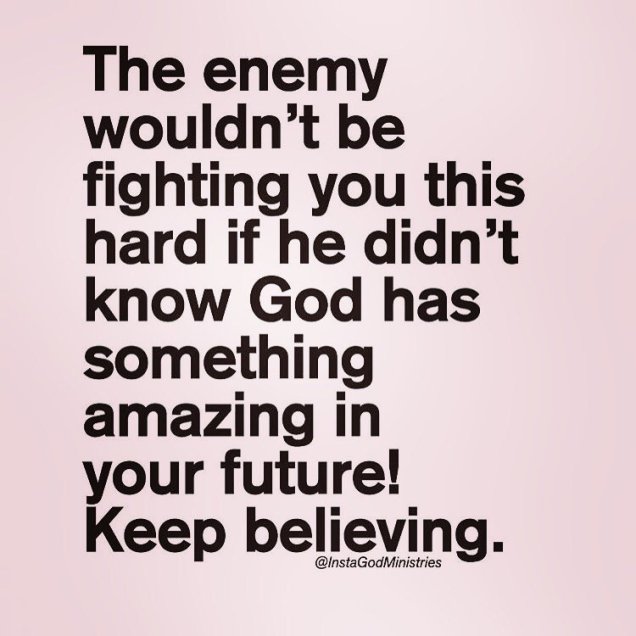 I believe this truth to no end.

God has a beautiful plan for you.

And although it’s hard to see that right now- past all the pain, anxiety and difficulty you have been put through, please remember your a Fighter and a Survivor! 🏋️‍♀️

And because of your strength- I am too.

You have inspired me to never give up even during my darkest times.

To keep my head held high when I want to fall to my knees and to always look for the good in everyone.

Your my hero Cecilia Marie!

Don’t you ever give up!

We are Hope Addicts and with our faith, you will get through anything with us all by your side.

You have a Courage Crew!!! 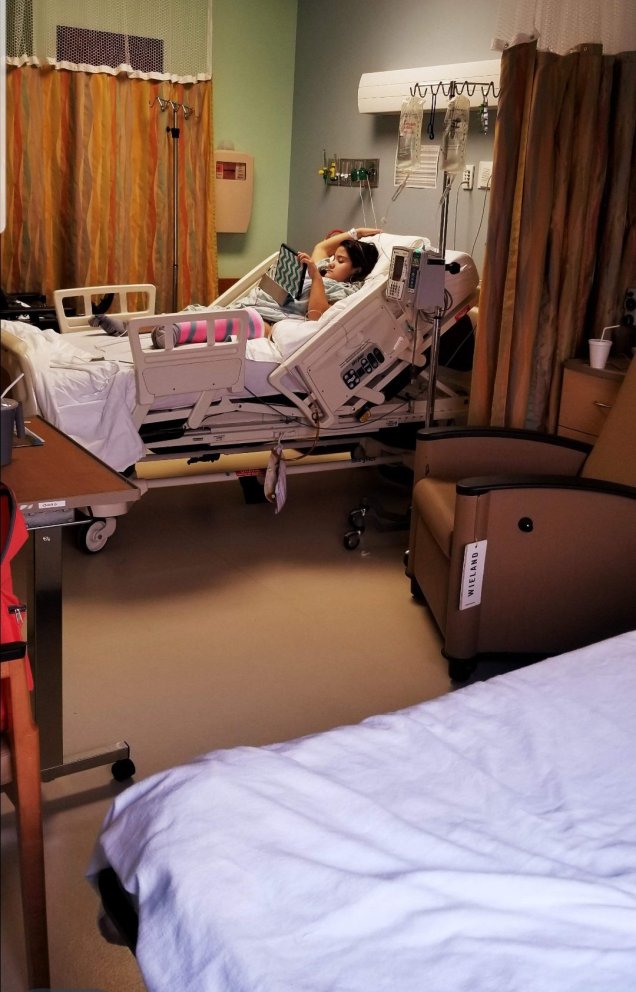 I think the lack of sleep is finally getting to me.

I just deleted my entire post about Finding Answers.

So this time around I’ll give you the quick version.

Ceci just returned from CT and xray a few moments ago.

Her doctors are covering all grounds and have decided to make sure that ceci isn’t having any Shunt issues as well.

She’s had this dry cough for a week now and we can’t seem to give her any relief from it. We’ve tried all types of cough medicines, a vaporizer and vicks as well.

I know it sounds crazy but in the past sis had a similar symptom from a shunt malfunction.

Has anyone else had a cough due to shunting issues? We’d love to hear some feedback on this from other hydroshunters. Lol that’s right I just made up a word 😂 2 hours of sleep will so that to you.

But seriously what kinds of odd symptoms have you seen or experienced from a shunt not working?

We did find out from ceci’s viral swab that ceci is definitely illness- sick. She has tested positive for a strand of influenza A again 😖

Her younger brothers and herself, had it about a month ago and apparently the flu isn’t done with us yet.

So they believe with her being so darn sick that it has contributed to all these Cecostomy issues.

Her violent cough, vomiting and crying built up so much pressure in her body that it pushed that darn balloon right through her abdomen wall and has ripped it up.

As of now we were just trying to control her pain and plan on procedure for monday, but we have another call in to have peds surgery come back around.

Her site is becoming more painful and we can’t get the drainage under control.

They removed the balloon and placed a tube into the stoma area to keep the pathway open. Then her pediatric surgeon did a unique taping technique to try to stabilize it until we could get me placement. But it’s not working.

Her nurse just came in and said before we called the surgeon back, he had changed his mind and decided to move procedure to tomorrow due to the pain.

Neurosurgery is here to see her about her scans, coughing, headaches and light sensitivity.

Please let her shunt be okay 🙏🙏🙏

I don’t think she can take anymore bad news.

We made it here safely about an hour ago and we are waiting for decisions to be made.

Ceci rode over by ambulance and I followed them with the van so we’d have ceci’s Wheelchair.

Ceci is still in a great amount of pain so they have been giving her Fentanyl to try to keep her comfortable until the attending is out of another surgery and decides what’s best for Ceci.

We’re hoping that she won’t need to have surgery again.

Hopefully they will be able to remove the balloon from her abdomen wall while she’s on pain medication, and place some other type of tubing in to hold the track open until things heal.

They evaluated ceci for sepsis and thank our lord that her results were fine.

She is dehydrated and anemic again, but that would easily be explained with what’s going on. She’s been unwell since Monday.

They are discussing testing ceci for one of 15 different kinds of viruses to see if we can figure out what’s causing her to be sick. I think having an answer would make us all feel a little better.

Please continue to pray for comfort for ceci, a game plan and some sleep for both of us.

I’ve been awake for over 24 hours now and besides the few hours of sleep she got at our local hospital, ceci’s in pretty much the same boat.

Thank you guys for all the support, prayers and good thoughts 💖

Alexis, Ceci and our family 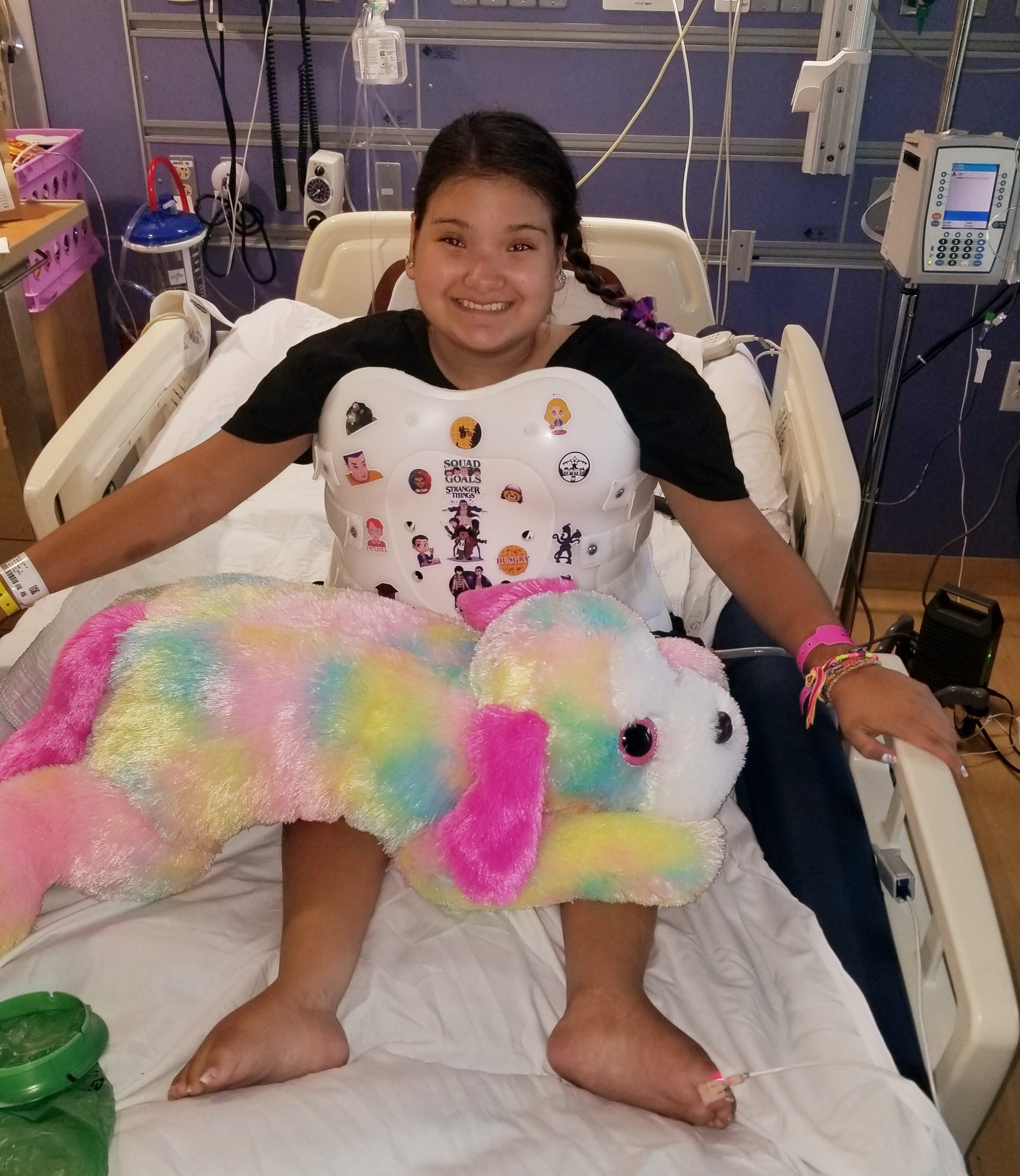 All Blog Posts from Author