Well I wish I could say it’s been a great day for Cecilia, but I’m afraid we’re just not there yet.

I had to call pediatric surgery to discuss some GI issues she’s dealing with and unfortunately it could cause us another trip back to Children’s if we can’t get it controlled soon.

We were given some tips and tricks to try today but it didn’t work so we’ll be back at it tomorrow.

I do not want to get in to, too much detail about what it is, but I will say she has not has a bowel movement since Monday.

With Ceci’s history of neurogenic bowel this is not good. It could cause an obstruction.

We’ll have to see how tomorrow goes but if her intestines don’t get working again soon, it may be another hospital stay 😓

My concern for Ceci is elevated this evening because she’s running a fever on top of this other stuff. 100.9

She hasn’t had a fever in over a week. *sigh*…… please don’t let another viral illness knock her down Lord.

I got her into bed shortly ago and I could tell in her face that she wasn’t feeling well but didn’t want to say anything.

So she changed into pajamas and I did her wound care. All though it was not easy this time. Her site is leaking alot, which is causing burning again.

I cleaned it up the best I could, used some barrier swabs around the opening to protect her skin and then used another colostomy bagging system to catch the seepage until we can get this under control and Ceci’s side heals.

She wants to get back to school and being with her friends so badly, but with the way things are right now I’m not sure when she’ll get to go back to school.

While she was in the hospital her wonderful school teacher miss Lauren was working with her each day. It was school work but it took her mind off what was going on around her. And I believe it gave her a sense of normalcy.

It’s crazy the things that we take for granted and do not appreciate until you do not have ability to do them anymore.

Unlike a lot of other junior high students who would much rather be sleeping in on school days, Ceci appreciates school and misses it.

Well guys I better try to get some rest in case Ceci needs me in the middle of the night.

Her youngest brother Nicholas has been sleeping on her couch each night because he says he doesn’t want to sleep alone 😊 but I really think it’s because he’s worried about her and feels she needs protection from all she’s been going through.

Ceci really has the best brother’s a girl could ask for 💙 I’m so grateful that God blessed her with siblings and ones that love her so much.

We’ll be back soon.

Alexis, Cecilia and our Family 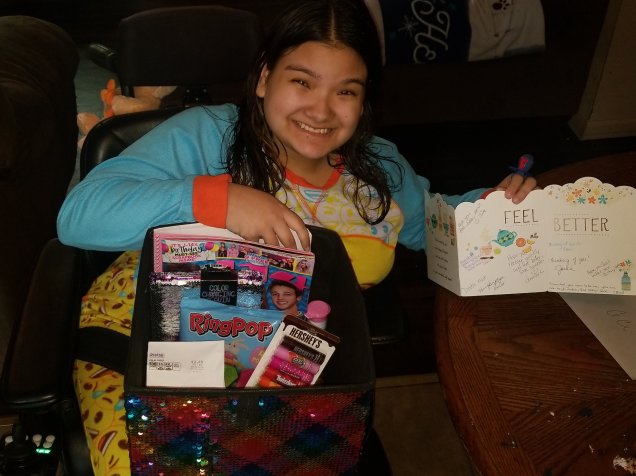 Ceci wants to send a huge thank you shout out to my wonderful co-workers and friends at Mississippi Valley Regional Blood center, for the amazing Get Well basket of goodies and the sweet card ❤ 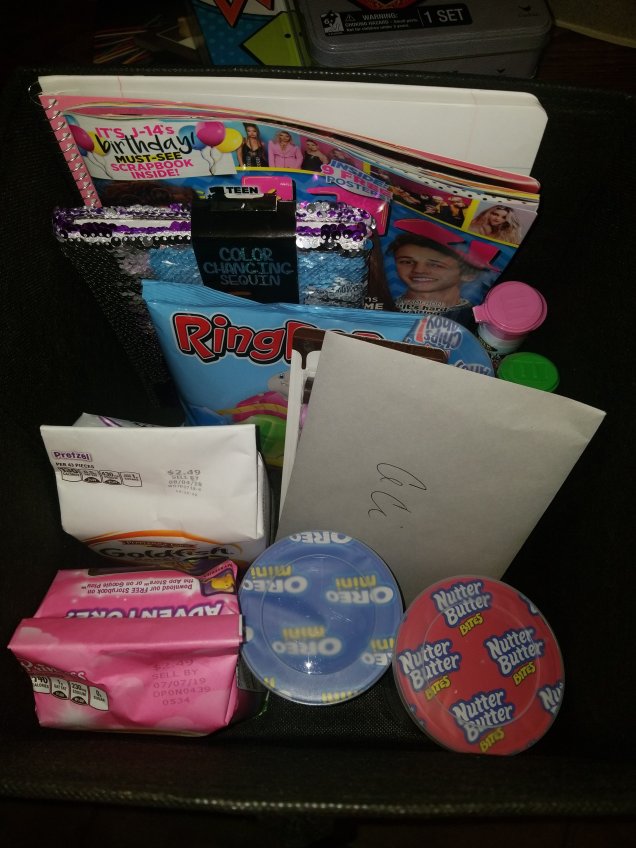 She loves everything! It was absolutely perfect and it meant alot to her. Thank you guys 💗

Ceci wants to send another big thank you shout out to our sweet friend miss Roberta Beach for sending her these awesome water proof Uno Cards.

Uno is her favorite game to play to pass the time in the hospital.

Usually our great friends in the Child Life department can track a set down for us to play but the hospital was fresh out. So sis had me going to all the gift shops in the hospital looking for a deck.

She’s so excited about these because they are water proof 😁 Ceci already has plans to play with them in our swimming pool this summer.

It really makes her day getting mail and your note made her smile.

She loved the quote as well.

Our family has another big thank you shout out to send out.

Ceci’s sweet friend Mary and her momma did some much needed shopping at Costco for us, the evening Ceci got home.

They delivered some home supplies that we needed, since I have not had a chance to shop in weeks.

Really meant alot since getting out of the house is hard for me to do right now.

Thank you so much dear friends 💜

All Blog Posts from Author